Women and Restructuring in Canada 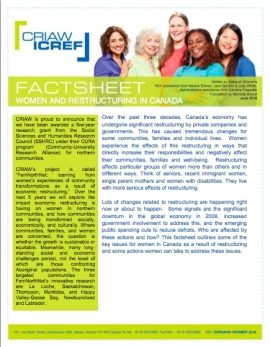 Restructuring to Canada’s economy by private companies and governments causes tremendous changes for some communities, families, and individual lives. Women experience the effects of this restructuring in ways that directly increase their responsibilities and negatively affect their communities, families, and well-being. Restructuring affects particular groups of women, such as seniors, recent immigrant women, single parent mothers and women with disabilities, more than others and in different ways. They live with more serious effects of restructuring.

Written after the significant downturn in the global economy in 2009, increased government involvement to address this, and the emerging public spending cuts to reduce deficits, Women and Restructuring in Canada explores who is affected by these actions and how. This fact sheet outlines some of the key issues for women in Canada as a result of restructuring and some actions women can take to address these issues.