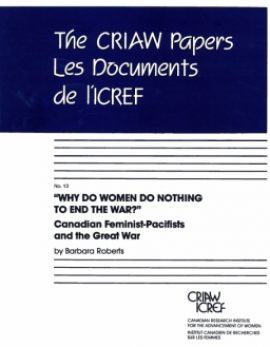 The CRIAW Papers comprises a continuing series of publications: original research papers advancing the knowledge and understanding of women’s experience.

More than ever before, women are concerned with the question of peace and how to achieve it as distinctions between military and civilian, combatant and non-combatant, fade into nothingness with the threat of total nuclear destruction. The involvement of women in contemporary peace movements, where they play crucial roles, has spurred an interest in understanding the historical record of women in past peace groups and movements. While this history can be traced back to the beginnings of the nineteenth century at least, the most vocal, recognized efforts occurred during the First World War and in its aftermath. As this paper demonstrates, Canadian women formed a link in the international chain of peace efforts which characterized the period. This paper provides a glimpse of the Canadian women’s peace network during WWI through four biographical portraits of feminist pacifists with strong ties to the farm, labour and socialist movements of the day. The paper raises interesting questions about the complexities of female resistance to war — its sources, motivations and organizational formations. At the same time, it asks the reader to think about power and domination in the context of women’s values, particularly maternal ideologies which are shared by militarists and pacifists alike.