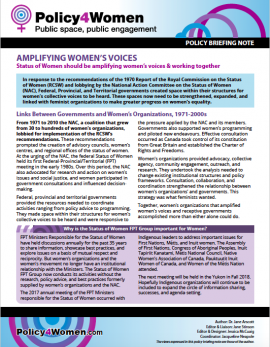 After the Royal Commission on the Status of Women (RCSW) released their landmark report in 1970, a lot of time and resources were put into supporting women’s organizations and establishing mechanisms to ensure their input into government decision-making. However, over the past two decades engagement between women’s organizations and Canadian policymakers has greatly diminished, which means many decisions are being made without accounting for the perspectives and ideas of Canada’s diverse women. In the wake of the RCSW report’s 50th anniversary, this briefing note outlines the many ways Canadian governments can support women and meaningfully (re)engage with women’s organizations.