Take Action for Equality, Development and Peace: A Canadian Follow-Up Guide to Beijing ‘95 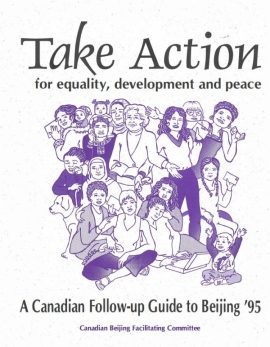 This report was written by representatives of 13 Canadian women’s groups, including CRIAW-ICREF. These groups received input from hundreds of organizations and individuals across the country. This project was coordinated by the Canadian Beijing Facilitating Committee (CBFC), whose mandate was to facilitate Canadian knowledge of, and participation in, the Fourth U.N. Conference on Women and Forum ’95. The Beijing Platform for Action (BPfA) came out of this Fourth World Conference on Women, held in Beijing in 1995.

Learn more about the BPfA and its critical areas of concern, how the BPfA can be applied in the Canadian context to advance women’s equality as well as access an International Country Monitoring Tool and a Canadian Women’s Equality Report Card!